“You’ve really gotta do something about that name.”

The need for simplicity is hardwired into our brain. Mental shortcuts called heuristics leverage rules-of-thumb to sidestep comprehensive analysis and simplify decision-making. Without heuristics, no one would make it through the menu at Cheesecake Factory.  Heuristics utilize the necessary information to take the perceived best action. This is especially important in modern day given the unprecedented volume of information; in fact, more data has been created over the last two years than in the entire previous history of the human race.  As big data gets even bigger, the need for simplicity increases as heuristics works overtime.

I’m an unabashed advocate for simplicity.  (K.I.S.S.)   Straightforward and simple makes it easier to accommodate heuristics’ hand on the brain’s steering wheel.  So why go to market with “GvG17”, a brand that contradicts heuristic-pleasing logic with three consonants, zero vowels, and two numbers? Creativity made me do it.  Is GvG17 an acronym? Is it a symbol?  Are they initials?  By the third question, most rational human beings have lost interest and moved on.  The brain took an exit ramp off the GvG17 Highway.

My passion for simplicity is matched by my passion for creativity. Typically they complement each other, but sometimes, they’re in a cage match fighting to the death.  When it comes to “GvG17,” creativity has simplicity in a choke hold.  The brand has meaning and depth but is admittedly complex (by design).   More behind the intentional complexity in Part II; For now, I’m doubling down on creativity and asking you to take two minutes to jump on.

To gather unique perspectives on the GvG17 brand, I’m crowdsourcing creativity by asking you, your friends, and your neighbors (including that weird one) to submit your most creative interpretation of the brand “GvG17.”  The goal is to enlist the creativity of the crowd to uncover new insights.

The ten most creative entries will receive a GvG17 shirt that proudly states, “I’m wearing this t-shirt to signal my creativity.”  Creative entries and the actual definition will be featured on next month’s post, “What’s a GvG17? Part II.”   Anonymous submissions are accepted, but your email address is required to be eligible for the t-shirt.   Deadline is October 26th. 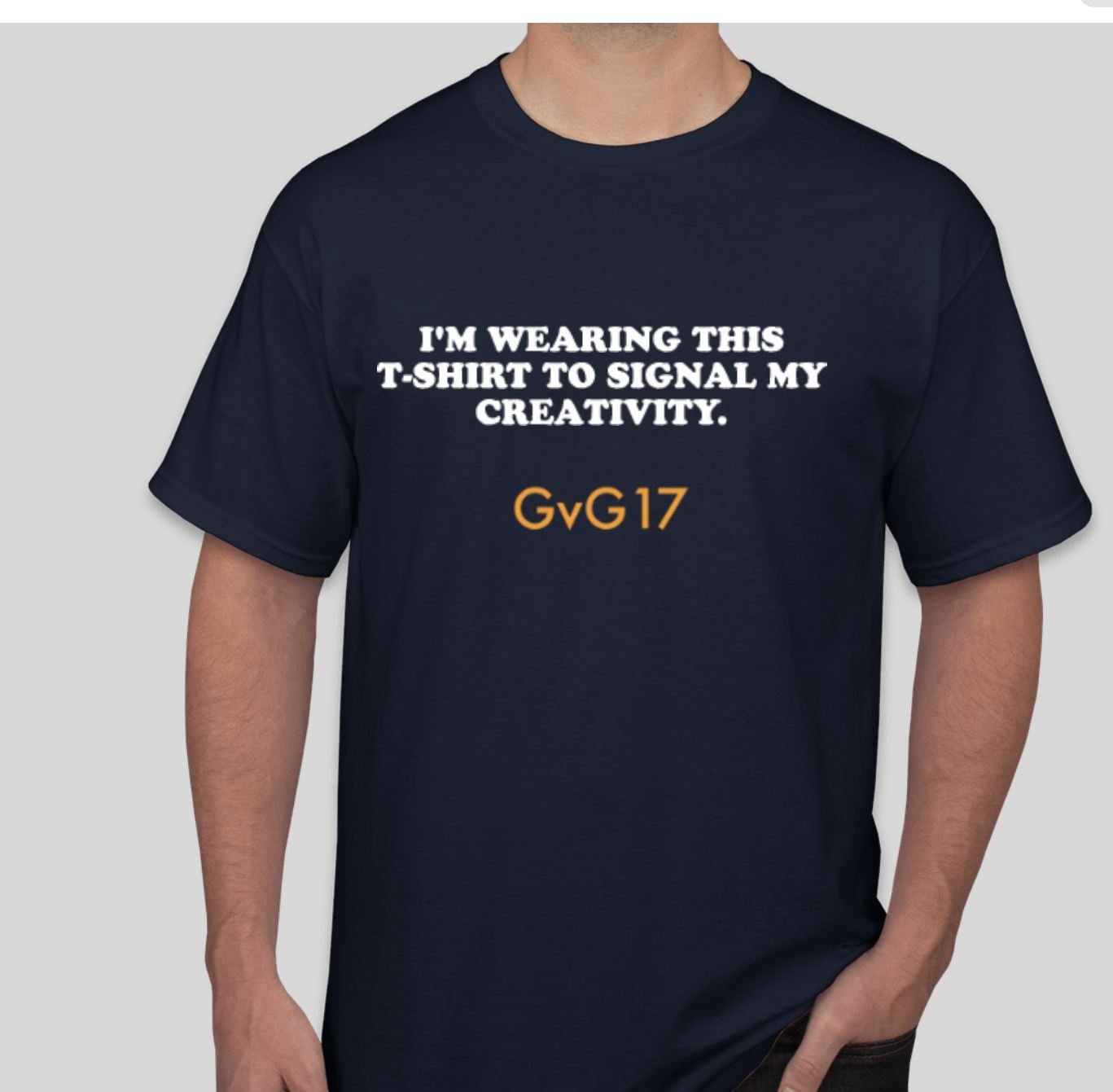 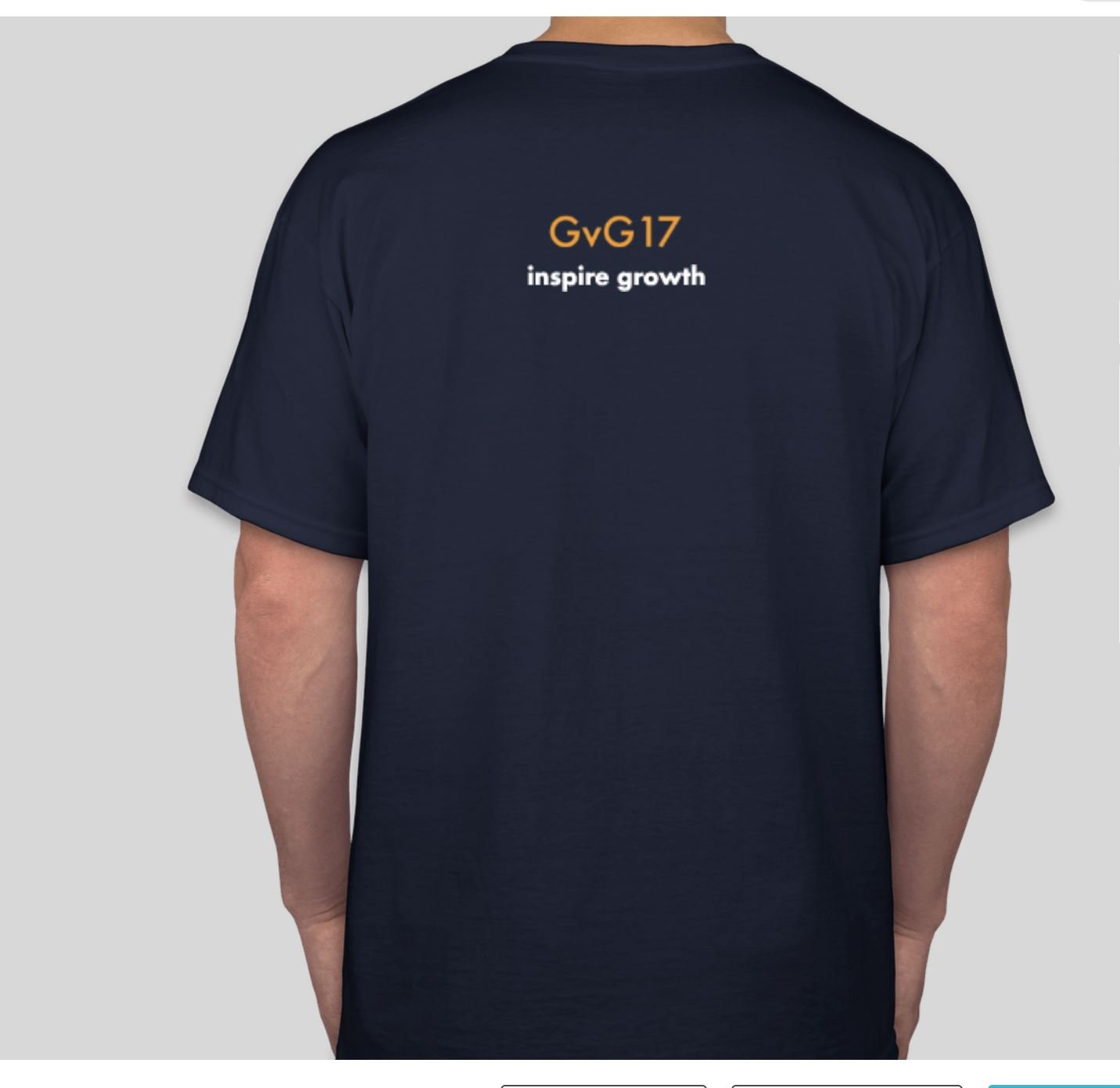 The most viewed TED Talk of all-time is Sir Ken Robinson’s, “Do Schools Kill Creativity.”  It’s been viewed 53 million times since he delivered the speech in 2006.  Robinson says, “If you’re not prepared to be wrong, then you will never come up with anything original.”  Watch the video with an eye toward YOUR personal level of creative confidence.

GvG17 hosted a happy hour at McMenamins Anderson School on September 20th.  Participants were immersed in a creative environment, fueled with finely crafted beers, and given a card with the question, “What does GvG17 mean?”  Below are some of the creative responses. 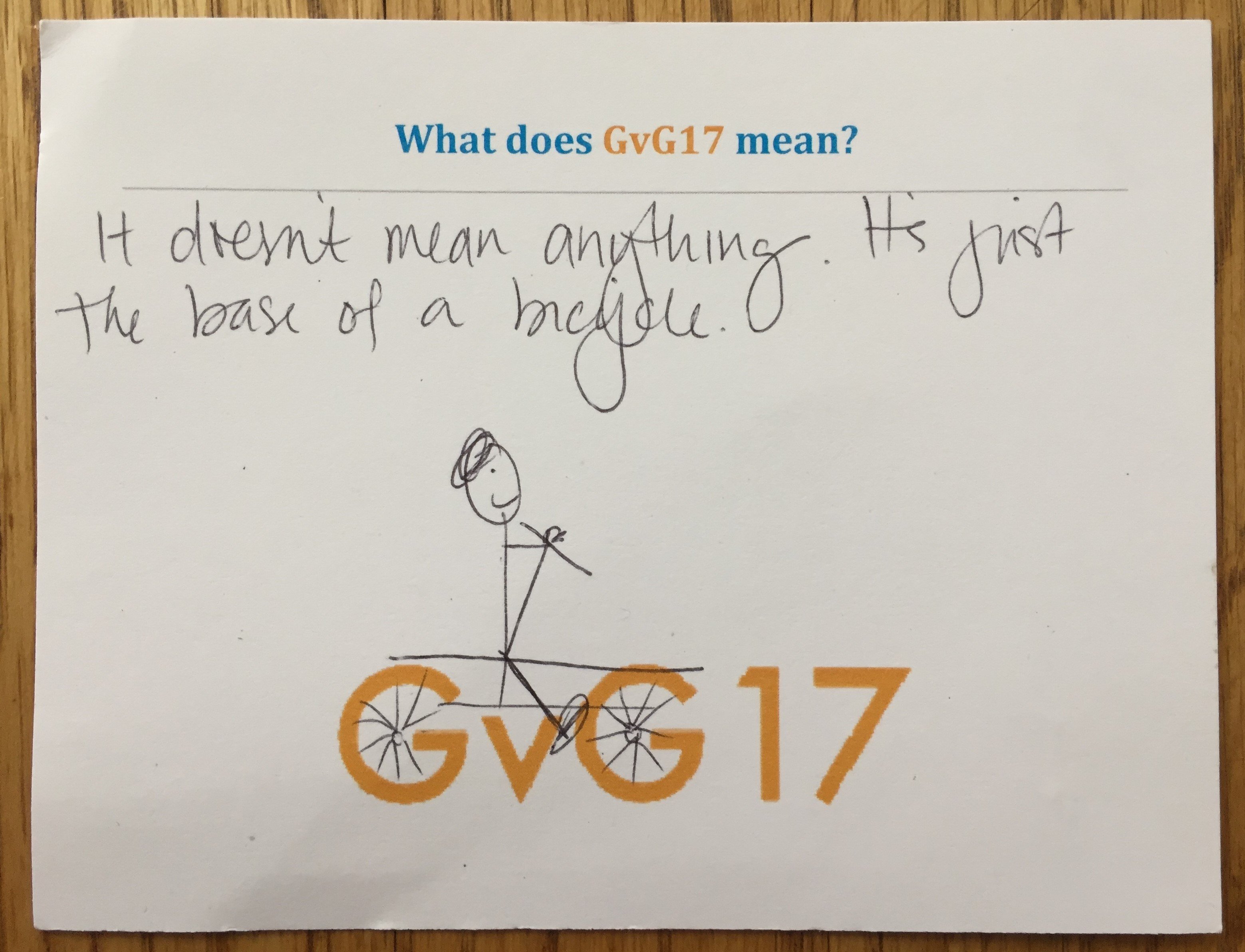 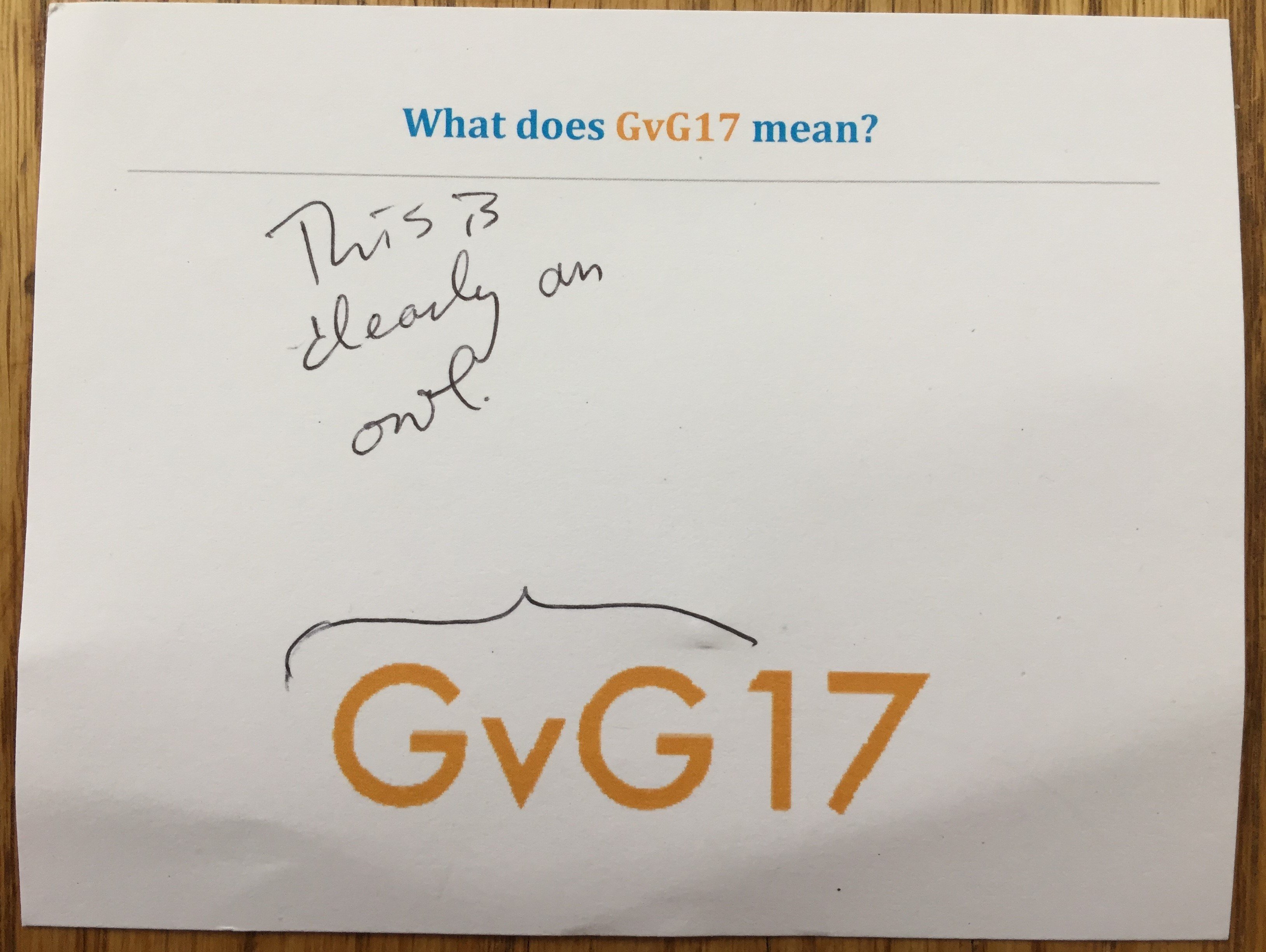 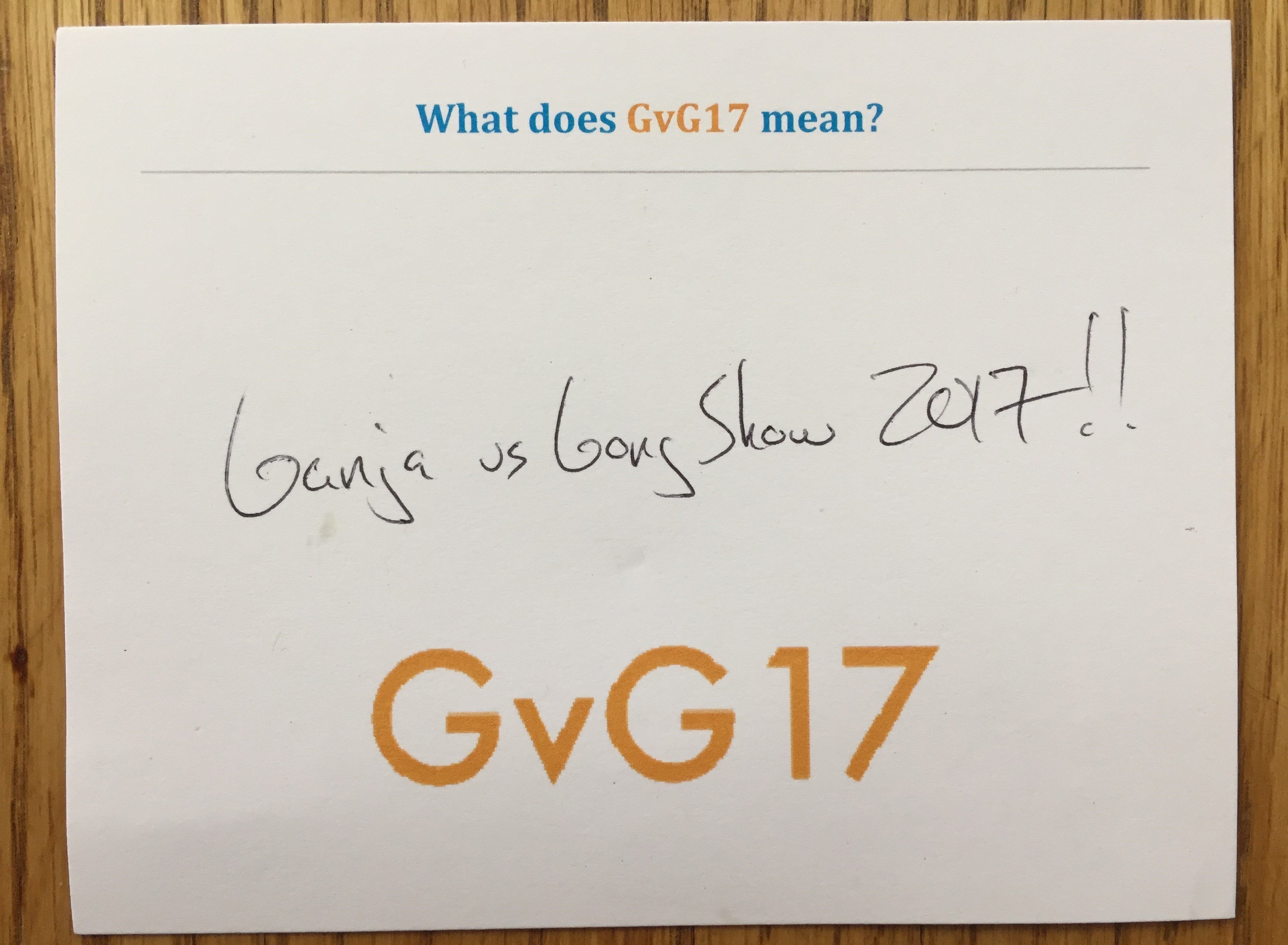 Your 2-minute mission:  What does GvG17 mean?

Now it’s your turn to flex your creative muscles. Two options, 1) Define with words -or- 2) Interpret with imagery.  Let your creativity flow and provide your best response by October 26th!  Winners will be revealed on the November 5th Monday Morning Joe:  “What Does GvG17 Mean?  Part II”.

Simply drop your definition below.

(Name + Email are optional, but required for t-shirt eligibility)

3) Take a picture and email to info@GvG17.com